I donâ€™t have a map of this oblast, so my location descriptions are rougher. We had a strong storm that came through last night. My tent corners leak, but otherwise everything was dry. I packed up a wet tent this morning. Within a kilometer of starting out, the road returned to gravel. Some tough rocks were embedded in the road in the first 10km. We also had several steep hills to climb over, only to descend on the other side. This theme of hills was repeated itself through the day.

At 17km was a detour sign. Behind the sign, the road sure looked smooth. We hesitated briefly before bypassing the sign and deciding to ride through the detour. One kilometer further, there was a big gravel pile that we climbed over. After this, we had a beautiful new smooth road. Part way through the construction workers were busy putting on another layer of asphalt. Unlike what I would have expected in the US, the workers didnâ€™t chase us off. Instead, they asked the standard curiosity questions and helped us look on the maps. We had more smooth hills after this until finally reaching the end of our private road at 33km.

Another 5km of cycling was on partially constructed roads before eating lunch and then we were back on the gravel. This next section was sometimes rough. I even walked a hill or two. We kept crossing the new road being constructed. At 58km we came to the first cafe for the day in Ð¢ÐµÐ¿Ð»Ð¾Ð¾Ð·ÐµÑ€ÑÐº. There was also a store to refill on groceries. An obnoxious man came over with alcohol on his breath. I tried to shoo him away, but he was persistent. Finally, it was a good excuse to leave. The store keeper referred to him as a â€œbanditâ€.

The use of word â€œbanditâ€ amused me since before cycling the Amur Highway, I had been told and had read, that there could be bandits along this highway. These bandits would hold up and steal automobiles and hence this is why cars traveled in groups. I had also been told that if an auto broke down, that it would be abandoned and burned since there was no way to get it repaired.

On our travels along the Amur Highway, we saw no signs of such bandits nor of any burned up cars. I wonder how much of these tales have really happened and how much are part of the folklore of the road. Each year as the road becomes easier to drive, will these tales persist and people be told to be careful to watch for bandits?

We had another 9km of asphalt here that ended at Ð›Ð¾Ð½Ð´Ð¾ÐºÐ¾. We crossed a large river and decided to fetch water at 70km. It was now starting to rain so we decided to camp fairly soon. Unfortunately, we had several tries and each place we tried was either too marshy, too close to the road or otherwise unsuitable. Finally we found a spot on top of a large gravel mound. It rained briefly, but then the sun came out and helped dry the tents before sunset. 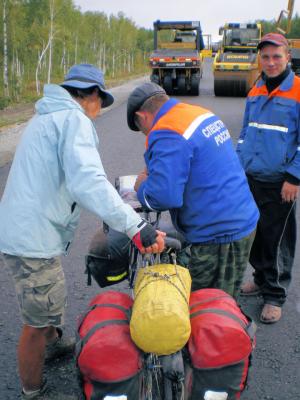 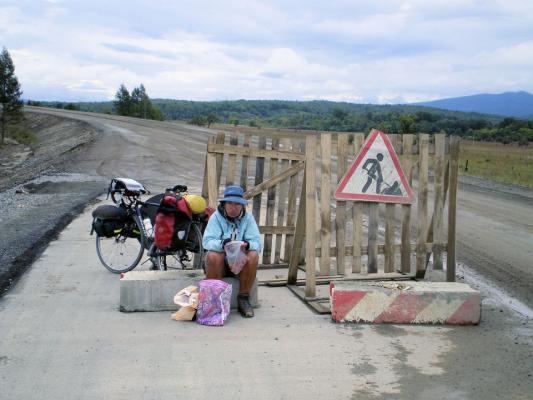